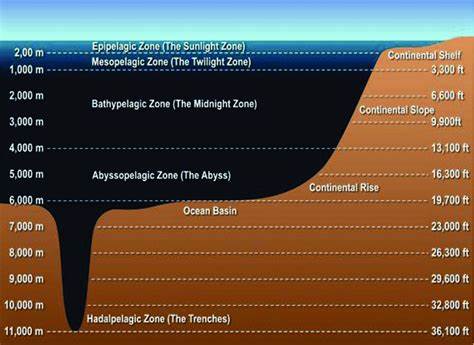 Why is the ocean layered?

The ocean is layered because of the temperature and salinity. It possesses a different density in each layer. The layer where the density is less tends to be less saline and the layer with the high density is more saline. The density of water plays an important role in the layering. The different densities of water result in temperature and salinity change.

The major layers in the oceans include:

The epipelagic zone is the uppermost part of the ocean where there is enough sunlight to allow photosynthesis. This zone reaches from the sea surface down to approximately 200 m (650 feet).The epipelagic zone only represents 2-3% of the entire ocean.

The mesopelagic zone is sometimes referred to as the twilight zone or the midwater zone. It is the zone beneath the epipelagic zone and above the bathypelagic zone, with depths generally between 200 and 1,000 m (656 and 3,280 ft). The mesopelagic zone receives very little sunlight and is home to many bioluminescent organisms. The limited sunlight also makes it impossible for photosynthetic organisms to survive

The bathyal zone or bathypelagic is the part of the pelagic zone that extends from a depth of 3,300 to 13,100 ft below the ocean surface. The bathyal zone is in permanent darkness, with only a tiny amount of sunlight able to penetrate. There is no primary production of plant life in the bathyal zone, so all creatures that live there are carnivorous.

The abyssopelagic or abyssal zone is the layer of the ocean from 13,000 feet to the sea floor at 20,000 feet. The abyssal zone is in total darkness with extreme temperatures near freezing and pressure of up to 600 times that of the surface. Invertebrates like sea stars and squids can survive in this environment. The Abyssal zone alone makes up over 83% of the ocean and covers 60% of the Earth.